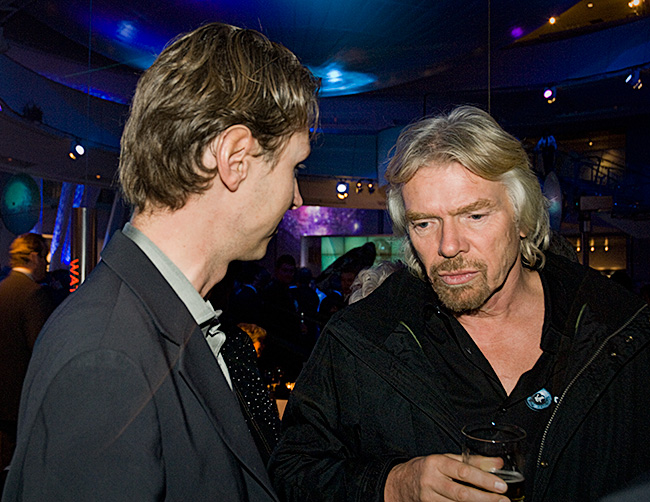 Richard Branson, and how to play the long game.

Today’s news that Virgin Money has bought Northern Rock for £747m should come as no surprise for two reasons. Firstly, it was always the government’s intent (both Labour when they nationalised it, and the coalition government when they took over responsibility) that Northern Rock should be privatised when the time was right, and secondly because those with a long enough interest in these things will remember that Richard Branson expressed more than a passing interest in buying Northern Rock back in early 2008.

My interest in this is of course photographic. When in early 2008 Northern Rock was having all its problems, Branson was heavily involved in another of his ventures – Virgin Galactic. On the 24 of January he held a press conference at the Museum of Natural History in New York to unveil White Knight Two and Space Ship Two. That evening, Virgin Galactic hosted a reception for the “astronauts” and other interested parties. It was at that event that Branson met a London based financier who knew of his interest in Northern Rock. Said financier advised Branson that he acted on behalf of two of the biggest shareholders in Northern Rock at the time and might be in a position to help. I took this photograph at that moment. A second later Branson turned to his aide de camp and told him to set up a meeting with the financier back in London for the end of the week.

Of course, there has been a lot of water under the bridge since then. I had originally hoped that the initial Virgin deal might go through in 2008, at least then I would have had a picture that might have been pivotal to that story. Instead what I have is evidence that when things do not initially go quite the way he might hope, Branson is not put off. I suspect that he is the kind of man who takes the view that all things happen for a reason, and all outcomes pose opportunities rather than problems. Indeed it is precisely that frame of mind that has allowed him to build the Virgin brand into the hugely successful organisation that it is.

So here we are nearly four years later, and Branson has got Northern Rock. Has it worked out better for him? Has the tax payer taken a hit? I’ll leave you to consider that for yourself by reading this rather enlightening article published in the Daily Mail just a few days after the photo above was taken. It was written by one Vince Cable, at the time in the enviable position of being the Treasury Spokesman for the Liberal Democrats, and apparently never likely to have make important decisions to affect the economy… like I said, a lot of water under the bridge since then! Do I have a photo of Vince for you? Of course I do. Happy ruminating.