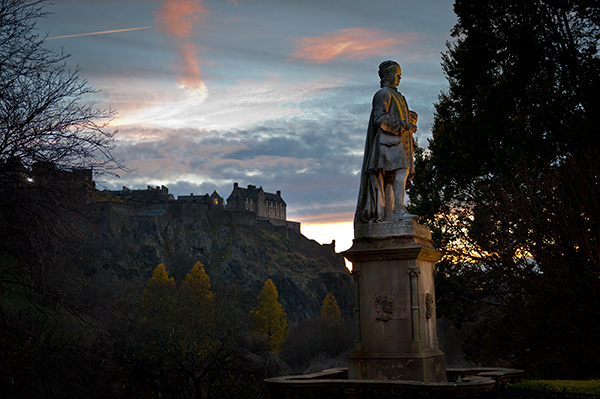 Style and substance – the outcome

After all the teasing, we have the outcome, but is there an answer to my earlier question?

The fourth video in Nikon’s teaser series was set in that wonderful city of Edinburgh, and it reminded me of this photo which I took while I was there to deliver a speech just under a year ago. I was, as I recall, pacing the bitterly cold streets trying to arrange my thoughts in some coherent order, and looking for inspiration when I came across this scene.

I rather like the quiet contemplative nature of this image, which was very much at odds with what you do not see, namely Princes Street with pre-Christmas bustle. It was taking this image that started to give order to my thoughts, and the speech I gave the following day was a great success as a result. Perhaps then, when you view the fourth of the Nikon videos, the reason why I should think of this one image will become clearer. But it also raises some questions, now we know what the tease was all about.

With great fanfare, Nikon have launched the Df. A full-frame DSLR with retro styling, and more than a nod to the idea of beating obsolescence. I will not embark on a detailed review of what this machine can and cannot do, as there are more than enough equipment fans doing that already. What I am more interested in is whether the marketing is just hype, or whether (as the title of these posts suggests) there might be some substance to go with the style.

To be fair to Nikon, they have created a camera which is backwards compatible with all but three (I believe this is correct) of the lenses that have been created for the venerable F mount. Suddenly lenses which may have had no value in the modern age will have an attraction for the very real and different qualities which they can bring to image making. That is not just style, it hugely expands the range of tools available to photographers. It is something which no other camera manufacturer could do, with the exception of Leica. Canon and Minolta and all the others abandoned their lens mounts around the time that autofocus was invented in the late 1980s. Nikon, however, took the view that cameras were not as important to photographers as lenses, and the Df is a natural extension of that philosophy. It is a philosophy for which they should rightly be praised.

One of the other intriguing things about the pre-launch tease was the suggestion implicit in the six videos (the fifth and sixth are at the bottom of this post) that “pure” photographers are British and love Scotland – which is of course true! The “pure” photographer is a refined person who likes to be at one with his or her thoughts, and the image making comes as a deep-seated emotional or visceral reaction to the circumstances in which he or she finds themselves. It is undeniably poetic nonsense. But like all such things, it rings with an element of truth, and that resonance is what makes the marketing so successful. The world is overrun with people who want to be “photographers” not because they are interested in the world around them, but because they like the idea of the way it makes them look – serious, comtemplative and erudite; at one with the real issues of the world. It is a kind of mock-bohemian ideal, a 21st century equivalent to the 60s beat generation. Photography in the digital age offers a fast track entry to creativity with none of the apparent hurdles of training, skill or talent. The reality is of course at odds with this, and we find ourselves drowning in a sea of visual sewage, to paraphrase Grayson Perry in this year’s BBC Reith Lectures.

Nikon’s launch of the Df yesterday was accompanied by suggestions that it was a future classic. Many have suggested that this is wishful thinking, but the truth is that only time will tell. My interest in this camera comes about only because I was about to buy the D4, and it stands to reason that I would want to see if this camera could meet my needs as a working photographer. On the face of it the answer is yes, but looking deeper I have some reservations which will only be resolved once I have had the chance to try it for myself. Each of the reservations is a little thing taken on its own, but collectively I think they undermine Nikon’s attempt to create the “future classic” for “pure photography”.

Firstly, it stands to reason that Nikon would assume serious photographers attracted to the Df would frequently already be Nikon users – hence the desire to make it backwards compatible with the entire lens lineup since 1959. That suggests such people would already be using cameras like the D4, D800, D3, D2 etc. All of these cameras use only, or offer the choice to use, compact flash cards. The Df, however, is SD card only, and while the other cameras mentioned have dual slots, the Df appears only to have one. The dual slot is not just about capacity, it is also about backup. With film photographers when they were processing, but in the digital era it is not unknown for memory cards to fail, or for cameras to suddenly format data for no apparent reason. The dual slot gave workign photographers the chance to work without fear about the security of the images, so by offering only one slot with the Df, Nikon has undermined the attempt to give photographers that relaxed and carefree walk through the highlands which the marketing promises.

Secondly, my cameras get used heavily, and while the D4 has a shutter mechanism tested for 300,000 cycles, the Df is only tested to half that number. True, it is only half the price of the D4, so one could buy two, but it necessarily leads one to wonder how well built the Df actually is. The marketing material says that it has the weather-sealing of the D800, but frankly if I want to be out in Scottish weather, I think I would rather have a Nikonos. OK, I am taking the mick, but the D4 would have no problems with inclement conditions – I would be a bit more circumspect with the D800.

Thirdly, even in the days before autofocus, one of my favourite cameras was the Minolta X700 with its motordrive, which allowed for an extra shutter release with the camera in portrait orientation. All of Nikon’s pro-spec DSLRs have either had such a release built in, or available as part of an optional battery pack. Not so with the Df. Admittedly one of the draws of the Df is that it is very light for what it is, the portability being its great selling point compared to much heavier bodies, but that is at odds with its purist ideals – if the purist of purists Ansel Adams could climb the mountains of Yosemite with a 10×8 Deardorff I think we can cope with a couple of extra ounces  – one might argue that a purist’s camera would cater for all approaches. Indeed, the mechanical marvel that was the FM2 had the option of a motordrive, so it does seem an odd ommission not even to have the possibility of this being introduced later for the Df. Just in case you are wondering, I have seen nothing written about this anywhere, but a simple view of the bottom plate of the camera shows that there is no lug-hole to allow registration with a pin one would normally expect on an accessory batter pack.

Finally, there is the styling itself which I think is a distraction. Don’t get me wrong, I love dials over buttons, but it seems to me that all of the things Nikon wanted to achieve with the Df could have been done without the retrostyling for its own sake and that includes the dials. In the final analysis, pure photography is actually about what you are taking a picture of, and not what you are taking it with.

The outcome then is that it is almost all style without substance. Aside from the facility to use any Nikon lens made, nothing about the Df is revolutionary in any way. Is it any good? Like any other camera it really depends on who is behind it and their relationship with what is in front of it. I will reserve judgement until I have had a chance to play. It may well be that I get one, but it will be because of whether it will cope with what I throw at it, not because of what it looks like.

Published in Equipment and Soap box